CDC Director: We’re On Track For Close To 450,000 Deaths By February 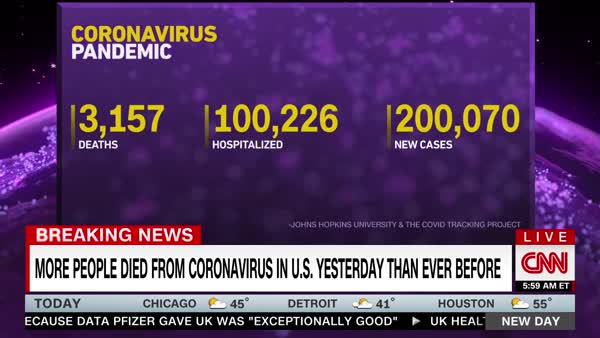 CNN’s New Day started today with grim news: More people died from coronavirus in the United States than ever before, 3,157 American deaths reported.

“That’s the most in a single day since the start of the pandemic. More than 100,000 American people are hospitalized this morning, also an all-time high. And more than 200,000 new cases were reported this morning, meaning this wave is about to get much worse. How much worse? The director of the CDC warns that the next three months will be, quote, ‘the most difficult time in the public health history of this nation,’ ” Alysin Camerota said.

“So to be clear, the United States reported more deaths yesterday, more than 3,000, than Japan has suffered the entire pandemic. Look at that. We hit it in one day. So faced with the worst health crisis in the history of the nation. What is the president doing? He’s trying to overturn the election in public, literally trying to undermine democracy in public. A 46-minute word salad of lies about the election, the election he lost, he is completely detached from both reality and liberty and still in control of the nuclear codes for another 50-plus days,” John Berman said.

“On top of that, he’s doing it largely for money to raise cash for a fund that he can use to fly around the country and throw parties at Mar-A-Lago. His former national security adviser, the one the president just pardoned, is now publicizing calls for martial law to force a revote. The president has considered firing the attorney general of the United States, William Barr, according to the Washington Post. Why? Because Barr said he sees no evidence of the absurd claims that the president and his allies are making. That is how the president is handling this urgent moment in the pandemic. Oh, that and holding holiday parties that flout CDC guidelines, as we report record deaths. Some party. CNN’s Adrienne Broaddus live in Chicago with the breaking news on the pandemic. This horrible milestone, Adrienne.”

“John, indeed, another grim milestone for the U.S. The most deaths and hospitalizations yesterday since the start of the pandemic. Even though the prospect of a vaccine is right around the corner, experts warn the worst is still yet to come. Across the United States, the coronavirus pandemic passing devastating milestones this morning,” Broaddus said.

KY GOV. ANDY BESHEAR: No way to sugar coat it, it is the deadliest day that we have had.

“The country recording the most deaths in one day since the pandemic began and more than 100,000 people are in the hospital with the disease. The director of the Centers for Disease Control and Prevention warns that number will only increase, saying there could be close to 450,000 deaths by February.“

DR. ROBERT REDFIELD: I actually believe they’re going to be the most difficult time in the public health history of this nation, largely because of the stress that it’s going to put on our health care system.

“Los Angeles County this week recording its highest number of people in the hospital with the virus. And with new cases on the rise, the city’s mayor enforcing a stricter, safer at-home order.

L.A. MAYOR ERIC GARCETTI: It’s time to hunker down. It’s time to cancel everything. and if it isn’t essential, don’t do it.

“Health experts are bracing for an even higher number of new cases and hospitalizations in the upcoming weeks, when infections stemming from Thanksgiving gatherings surge. This pushing the CDC to again call for people to cancel travel plans for the winter holidays.”

It’s likely that unless really major efforts are to push harder with the public health measures, we could be facing the kind of circumstances that we really hope not to, where many hospitals just run out of capabilities to take care of all of the sick patients.

[VIDEO] Inmate Bought Drained Of Cellmate Advances So He Tied Him...